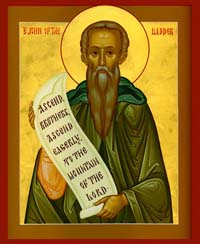 Nothing is known of his life before he entered the monastery of St. Catherine at Mount Sinai  at the age of sixteen; he remained there until his death at the age of eighty. After he first arrived, he spent nineteen years in strict obedience to his spiritual father, St. Martyrios. When St. Martyrios died, John retired to a nearby cave, where he lived in the strictest asceticism for twenty years. (It was during these years that he wrote the Ladder.) He reluctantly returned to the monastery when he was made abbot by the brethren, and spent the rest of his days guiding his spiritual children in the way of salvation.

Once he heard a monk criticize him for speaking too much; rather than reproach the monk, he himself kept silence for a full year, never uttering a word until the brethren begged him to speak again. At another time a large company of pilgrims came to Mt Sinai. At supper they all saw a young man, dressed as a Jew, serving at table and giving orders to the other servants, then suddenly disappearing. When they wondered among themselves what this could mean, John said 'Do not try to look for him; that was the prophet Moses serving you in his own home.'

When the holy abbot knew that his death was approaching, he appointed his own brother, George [St George of Sinai], as his successor. George grieved the approaching death of his beloved brother, but St John told him that, if he was found worthy to stand close to God after his death, he would pray that George be taken up to heaven in the same year. Therefore, it happened: ten months after St John's death, his brother George also reposed in the Lord and was later glorified by the Church as a Saint.

A handsome presentation edition of his classic book, “The Ladder of Divine Ascent” was recently published by the monks at Holy Transfiguration Monastery in Brookline, through the kind generosity of the late Lorraine Laham in memory of her son Jeffrey.  It is available at the monastery or through Amazon.  This timeless volume is highly recommended as spiritual reading during this Holy and Great Lenten Season.