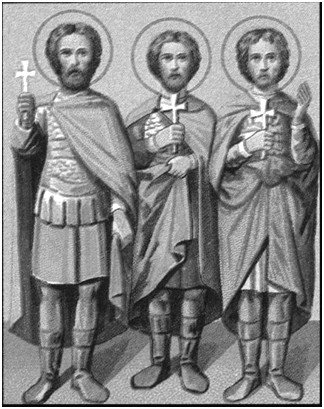 Well educated, these three learned men became high officials at the court of the Persian Emperor Balanos.  The Emperor sent them to Constantinople to negotiate a peace treaty with the Emperor Julian [the Apostate] between the Persian and the Byzantine Empires.  The Byzantine Emperor Julian, a pagan, had arranged for a celebration at the pagan temple at Chalcedon, and he went there with his nobles bearing sacrifices for the idols. The Persian delegates absented themselves from the celebration.

The Emperor summoned them and ordered them to take part in the festivities and offer sacrifice to the gods. They then declared that they were foreign envoys sent by the Emperor of Persia to establish peace between the two Empires, and not for any other reason. They said that they were Christians and considered it unworthy to bow down before lifeless statues and offer them sacrifice. The Emperor. in fury, had them thrown into prison. They were brought out the next day, and he began to dispute with them about the Faith, but the holy brothers were irrefutable and unwavering in their defense of the Christian Faith.

The embarrassed Emperor Julian had the three brothers publicly tortured.  During the ordeal, they prayed to God, thanking Him for it: 'O sweet Jesus, these pains are sent to us for love of Thee.' An angel of God appeared to them, comforted them and took away all their pain. Contrary to all understanding of the rights of foreign envoys, the Emperor Julian finally issued the order that the three brothers were to be slain with the sword.  It was the year 362.

There was a great earthquake at their execution, thus making it impossible for the pagans to burn them as the Emperor had commanded. The earth later gave up the martyrs' bodies for Christians to find and bury. Many miracles were worked over their relics, bringing many pagan witnesses to the Christian faith. When the Persian king heard of the inhuman death of his envoys at the hands of  Julian, he prepared for war against him. At the head of his Byzantine Army, Julian set out for Persia convinced of victory.  Within weeks, Julian was beaten to his knees by the Persian Emperor and perished miserably on the battlefield.  The victorious Persians absorbed the border provinces of the Byzantine Empire and fortified their frontier.  The three noble brothers were quickly recognized as heroes by the Persians and as Martyrs by the Christian Byzantines.

Thirty years later the pious emperor Theodosius the Great (+ 397) built at Constantinople a church in honor of the holy martyrs, and St Germanus, Patriarch of Constantinople (May 12) wrote a Canon in memory and in praise of the holy brothers.