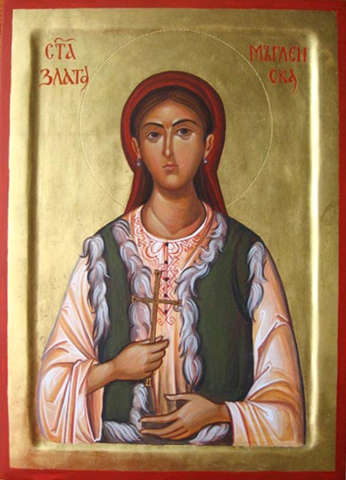 St Zlata was one of three daughters born to a local peasant family.  She was a meek and devout girl, wise with Christ's wisdom and golden ('zlata' means 'gold') not only in name but also in her God-fearing heart. When Zlata went out one day to get water, some shameless Turks seized her and carried her off to their house.

One of her kidnappers urged her to renounce Christ and embrace Islam and become his wife.   Zlata answered fearlessly: 'I believe in Christ, and know Him alone as my bridegroom; I shall never deny Him even if you put me to a thousand tortures and cut me into pieces.' Her parents and sisters then arrived, and said to her: 'O our daughter, have mercy on yourself and us. Deny Christ publicly, that we can all be happy. Christ is merciful; He will forgive your sin, committed under the pressure of life.' Her poor parents and kinsfolk wept bitterly but Zlata's heroic soul would not be overcome by devilish seduction.

She replied to her parents: 'When you urge me to deny Christ, the true God, you are no longer parents or sisters to me; I have the Lord Jesus Christ as father, the Mother of God as mother and, for brothers and sisters, the saints.' Then the Turks threw her into prison, where she lay for three months, and they took her out every day and flogged her until her blood flowed onto the ground. Finally, they hanged her upside-down and made a fire to choke her to death with the smoke. But God was with Zlata, and gave her strength in her suffering.

At the very end, they hanged her from a tree and cut her into small pieces. Thus this martyr-maiden gave her soul into God's hands, and entered into the realm of Paradise, in 1796. Pieces of her relics were taken by Christians to their homes, that they might bring a blessing to them." (taken from;’ The Prologue’ – a book of lives of saints)

The hostilities described in the account of St. Zlata’s life are tragically reoccurring today in Syria, Iraq and other parts of the world where Christians are openly persecuted and compelled to renounce Christ.  Today we witness a proliferation of new martyrs similar to St. Zlata.  Through her intercession, we pray for their welfare and ask God to strengthen them in their plight.