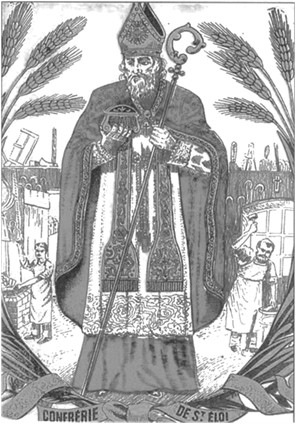 Eligius was born to a Christian family near Limoges in Gaul (modern-day France) in 588. He became a goldsmith, worked for the royal mint, and in time became a trusted counselor of King Chlothar II. Despite (or because of) the honors and riches that surrounded him, Eligius came to despise all of them and gave away all his property but what he considered essential for everyday life.

He devoted all his income to almsgiving and to ransoming prisoners of all nationalities from the slave markets. Many of these became his attendants and disciples in gratitude. Eligius' compassion became so well-known that when visitors asked for directions to his house, they would be told 'Look for the house surrounded by a crowd of beggars. That is where Lord Eligius lives.' The Saint washed the feet of the poor who came to him, served them at his own table and fed himself on what they left. If he ran out of money, he would give away furniture or even his clothing.

When King Chlothar died in 629, Eligius became the counselor of his successor King Dagobert I. He founded monasteries for men at Solignac and for women in Paris, telling the King 'These are the ladders by which we will both be able to climb up to the Kingdom of Heaven.' As a royal counselor, he helped to re-establish peace between France and Brittany, and improved the law of the kingdom to make it more just.

When Dagobert died in 639, Eligius devoted himself entirely to the service of God as Bishop of Noyon in Flanders. His diocese was still mostly pagan, and Eligius traveled untiringly to preach the Gospel of Christ, often at risk of his life. Having foreseen his approaching death, Saint Eligius reposed in peace in 660. When his tomb was opened a year later, his body was found incorrupt and gave forth a fragrant scent.