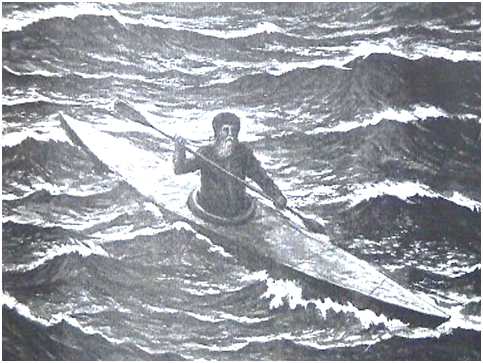 St Innocent, enlightener of Alaska and Siberia and Equal to the Apostles was born John Veniaminovnear Irkutsk in Siberia in 1797 to a priestly family.  John knew he wanted to be a priest from an early age. After marrying, he was ordained and served as parish priest in Irkutsk. An explorer told Fr. John of the great spiritual needs among the Russian and native peoples in Alaska, which was then Russian territory. Moved to serve Christ in this very difficult environment, he and his family left Siberia and arrived in Alaska in 1824. The young priest quickly learned the Aleut language and worked humbly and tirelessly among the native Aleut people. His spiritual classic, “An Indication of the Way to the Kingdom of Heaven”, was originally written in Aleut and later translated into Russian and many other languages.

It wasn't long beforeFr. John discovered the importance of being an expert at kayaking so that he could travel solo during the summer months.His flock was scattered among the many islands of the Aleutians and the Bering Sea and, with training from his Aleut parishioners, Fr. John quickly became an accomplished kayaker and was able topaddle the rough waters ministering to his people.  As a skilled cabinet maker, Fr. John also designed and built his own sea going kayaks.
Fr. John’s wife died in 1838 and one year later he was tonsured a monk and given the name of Innocent. Shortly after his tonsuring he was, without warning, consecrated Bishop of all Eastern Siberia and Russian America, probably the largest diocese in the world at that time. In Alaska, he continued his missionary work with vigor, traveling among Aleut and Tlingit settlements in his own kayak. At six-foot-three inches tall, he was both imposing and highly respected by the local people for his kayaking skills. There is a story of him traveling out to minister to his people in 1828. Things were going well as he kayaked his way out along the Aleutian Islands until trouble found him while he was between the Unalaska and Akun Islands. During that trip he was forced off the water twice due to storms and then almost capsized by a group of whales. When he got back he told the story as if it was a routine trip.

Wherever he went, he found the Alaskan people hungry for the faith, and his labors bore rich fruit which is still obvious today: Alaska has more Orthodox churches per capita than any other state.
In old age he was made Metropolitan of Moscow, head of the entire Russian Orthodox Church. His concern for Christian mission was undiminished, and as Metropolitan he created the Orthodox Missionary Society. He reposed in the Lord on Holy Saturday of 1879. Metropolitan Innocent was canonized on October 6, 1977 by the Russian Orthodox Church.

“To deny oneself means to give up one’s bad habits; to root out of the heart all that ties us to the world; not to cherish bad thoughts or desires; to suppress every evil thought; not to desire to do anything out of self-love, but to do everything out of love for God.”  St. Innocent of Alaska