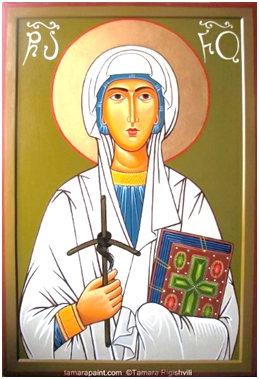 Her father,Zabullon, was a pious Christian and a relative of the Great Martyr St. George. Nina was captured and enslaved by the Iberians (later known as Georgians) and she was taken away to their homeland. In captivity, she lived a sober and pious life, devoting every free moment day and night to prayer. Her exceptional virtue attracted the attention of many, especially those hungry for Truth, and she simply and boldly proclaimed the Gospel to all who inquired of her.

Once she healed a woman's sick child by her prayers, and the report of this wonder reached the Queen of Georgia, who was herself suffering from an incurable disease. She asked the slave to come to her, but Nina refused out of humility, so the Queen had her servants take her to Nina's dwelling. The Saint prayed and the Queen was healed instantly. Returning home in joy, the Queen praised Nina and her faith to her husband, King Mirian. The king payed her little heed, but later, while hunting, he was suddenly engulfed by a dark cloud, so that he lost his way and was stricken by fear. Remembering his wife's report, he prayed "to the god whom Nina worships," and vowed that if he were delivered he would worship Him alone. Immediately the cloud vanished and the King received the light of faith. Hastening home, he found Nina and, King though he was, cast himself at the feet of the slave and told her that he had resolved that he and his whole nation should be baptized. He sent emissaries to the Emperor in Byzantium, who quickly dispatched bishops and priests to the Iberian king.  The first missionaries to ‘Georgia’ were from Antioch and are known in Georgian Church history as the Syrian Fathers.

When the conversion of the country was well under way, Nina, though now freed, determined to stay in Georgia, where she withdrew to the wilderness and prayed fervently that the people would be confirmed in the Faith of Christ. Saint Nina reposed in peace, surrounded by the King, his court and the clergy. Thus did a powerless slave woman, by the power of God, convert an entire nation.