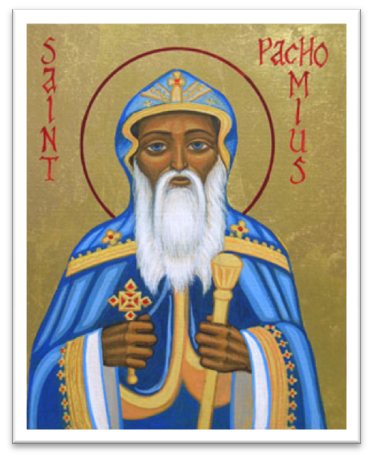 He was an Egyptian pagan who entered the Roman army at a young age. While quartered at Thebes, in Upper Egypt, he was amazed at the kindness of the local Christians, who brought food and drink to the soldiers. Learning who the Christians were and about their belief in Jesus, he eventually accepted Christ and vowed, once released from the army, to serve him for the rest of his life. At the end of his military service, he was baptized and became the disciple of the hermit monk St. Palamon, with whom he studied for ten years.

At a place called Tabennisis, in Upper Egypt,  an angel appeared to Pachomius dressed in the robes of a monk and gave him a tablet on which was written a rule for a new monastery — one in which the brethren live communally rather than as hermits, something that had not been seen before among Christians. The angel commanded him to found such a monastery. Pachomius set to work, building a fortress like structure with many private rooms for monks though there was no one to live there but him and his brother John who had joined him. When John questioned the unnecessary building, Pachomius only said that he was following God's command, without saying who would live there or when.

But soon men began to assemble there, and in time so many came to be his disciples that he eventually founded nine monasteries housing thousands of monks. The rule that he had been given for these monasteries became the model for all communal Christian monasticism thereafter. St. Pachomius died in 346, before his great Egyptian fellow-strugglers St. Anthony the Great and St. Athanasius the Great.

Entertaining angels unawares: Christian believers' simple acts of kindness toward their pagan oppressors may have seemed foolish to many, but it was such acts that opened the eyes of Pachomius to the light of Christ, and which bore incalculably great fruit: the founding of the monastic life which is still at the heart of Christ's Holy Church.