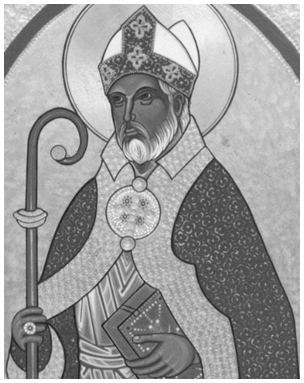 His mother, St. Monica was a Christian, and his father for many years a pagan (although he became a Christian before his death). His mother undertook to bring Augustine up as a Christian, and on one level he always found something attractive about Christ, but in the short run he was more interested in the attractions of the world, the flesh and fame.  As a rebellious teenager, he took up with a girlfriend, who bore him a son when he was about eighteen. Theirs was a long-term relationship and he never tells us why he didn’t marry her.  It seems likely that she was an ex-slave and the laws forbade marriage between a free-born Roman citizen and a slave, or an ex-slave.

When he was 19 and a student at Carthage, he read a treatise by Cicero that opened his eyes to the delights of philosophy. He was from the beginning a brilliant student, with an eager intellectual curiosity. For a long time, Augustine was attracted by the teachings of Mani, a Persian philosopher who taught a form of Zoroastrianism, the religion of Persia. Zoroaster had taught the existence of a power of light, God, the supreme Creator, and of a dark and evil power that opposed him and that the universe is the scene of an unending battle between light and darkness, good and evil, knowledge and ignorance, soul and body.

Augustine moved to Rome, and was appointed chief professor of rhetoric for the city of Milan. It was an extremely prestigious appointment. In classical times, when laws were often made and issues voted on by huge public assemblies, rhetoric -- the art of convincing an audience -- was a treasured skill. Every lawyer, arguing a case, was expected to give an eloquent speech, full of classical allusions and standard rhetorical flourishes. And Augustine was at the top in the field.

In Milan, Augustine met the bishop St. Ambrose, and found in him a reasonableness of mind and belief, a keenness of thought, and an integrity of character far in excess of what he had found elsewhere. For the first time, Augustine saw Christianity as a religion fit for a philosopher. Because St. Ambrose had answers for his questions and because he admired St. Ambrose personally, Augustine was converted to Christianity in 386 and was baptized by St. Ambrose at Easter of 387. About 12 years later he wrote an account of his life up to his conversion, a book called the “Confessions”, is ostensibly an autobiography but it is more an outpouring of penitence and thanksgiving. He lived for seventy-six years, the last thirty-five as bishop of Hippo in North Africa.
In recent years, a few Orthodox writers have tried to deny that Augustine is a Saint of the Orthodox Church (mostly due to some theological errors in his writings which have been unduly promoted in the western church). These claims are false: from the time of his canonization, he has been commemorated by the Orthodox Church as a Saint.