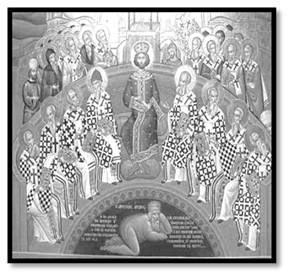 commemorates those Bishops and theologians who assembled at the Seven Ecumenical Councils.  These councils were convened to address and resolve issues that threatened the unity and witness of the Christian Church.

At first Nicea, in the year 325. Condemned the doctrine of the priest Arius, who denied that the Son is of one essence with the Father.

At first Constantinople, in the year 381.

Condemned the doctrine of Macedonius, Patriarch of Constantinople, who denied the divinity of the Holy Spirit. Edited the Creed to its present form.

At Ephesus, in the year 431. Condemned the

doctrine of Nestorius, Patriarch of Constantinople, who denied that Jesus Christ is fully God.

At Chalcedon, in the year 451. Condemned the teaching of Eutyches, that after the Incarnation there was only one nature, the divine, in Jesus Christ.

At second Constantinople, in the year 535.

Condemned the teaching of Origen and of Theodore of Mopsuestia about the nature of Christ.

At third Constantinople, in the year 680.

Condemned the Monothelite heresy, that in Jesus Christ there is only one will, the divine.

At second Nicea, in the year 787. Condemned Iconoclasm and upheld the holy icons.

Each of these Councils also put forth various canons [laws] and made other decisions.  They form the basis of the theology and practice of the Orthodox Church.