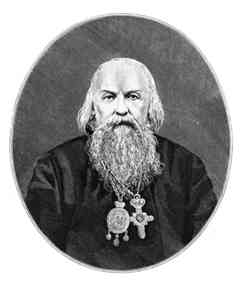 He was born in 1807 into Russian aristocracy — his father was a wealthy provincial gentleman. From a very early age he felt strongly called to monastic life, but at that time it was almost unheard of for a nobleman to take such a path, and Dimitri (as he was called in baptism) entered the Pioneer Military School in St Petersburg. There he distinguished himself, and even attracted the attention of Grand Duke Nicholas Pavlovich, an event which would profoundly affect his later life.

Despite his excellent record at the academy, young Dimitri still longed only for the things of God. In 1827 he graduated from the school and was commissioned as an officer in the army, but soon fell critically ill, and was granted a discharge. This proved to be providential: when he recovered his health, he immediately became a novice, living at several different monasteries and coming under the spiritual care of  Starets Leonid, one of the celebrated fathers of the Optina monastery.   In 1821 he took his monastic vows and received the name Ignatius. Soon afterwards he was ordained to the priesthood.

Soon after the newly-professed Fr Ignatius had entered the seclusion that he sought, Tsar Nicholas I — the former Grand Duke Nicholas — visited the Pioneer Military School and asked what had become of the promising cadet he had met a few years before. When the Tsar learned that the former Dimitri was now a monk, he sought him out, had him elevated to the rank of Archimandrite (at age 26!) and made him Superior of the St Sergius Monastery in St. Petersburg. Tsar Nicholas instructed him to make the monastery a model for all Russian religious communities. Though he had desired only a life of solitude and prayer, the new Archimandrite devoted himself conscientiously to fulfilling the Tsar's charge. The monastery did in fact become a kind of standard for Russian monasticism, and its abbot acquired many spiritual children, not only among his monks but among the laity in the capital.

After twenty-four years as superior of the monastery, St Ignatius was elevated to the episcopate in 1857, first as Bishop of Stavropol, then as Bishop of Kavkaz. Only four years later (aged 54) he resigned and spent the rest of his life in reclusion at the Nicolo-Babaevsky Monastery in the diocese of Kostromo. There he continued the large body of spiritual writings for which he is well known. His printed  Works fills five volumes; of these, at least two major works have been translated into English: On the Prayer of Jesus and The Arena: an offering to contemporary monasticism. Both are gems of spiritual writing, profitable to every serious Orthodox Christian.

St Ignatius reposed in peace in 1867. He was glorified in 1988 by the Moscow Patriarchate, during the millennial celebrations in that year. Saints Andrei Rublev, Xenia of Petersburg, Theophan the Recluse and others were glorified in the same observances.

“Speak well of those who speak evil of you.  Pay good for evil.

Pray for those who cause you various offenses, wrongs, temptations, persecutions.

Whatever you do, on no account condemn anyone; do not even try to judge whether a person is good or bad, but keep your eyes on that one evil person for whom you must give an account before God–yourself.” – St. Ignatius of Stravropol