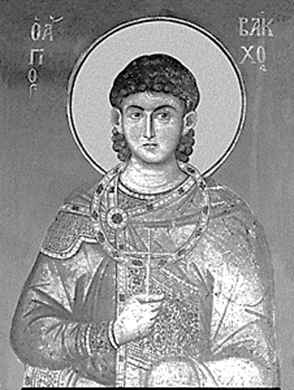 During the reign of Constantine VI and Irene, restorers of the holy icons, the Holy Land was under the control of the Muslim Arabs. Many Christians there apostatized, putting honors and security in this world above their eternal joy. One of these was the father of this Saint, who brought up seven children as Muslims. His wife however, never renounced her Faith and prayed constantly for the conversion of her husband and children.

Upon the death of the father, her third son Dachak declared that he wished to become a Christian. He was baptized in the Monastery of St. Sabas near Jerusalem, receiving the name Bacchus, and determined to be a monk. But the abbot, fearing reprisals against the Monastery, sent him back to his home in Jerusalem. His brothers, seeing his joy and boldness in confessing the Faith, decided to receive holy Baptism, except for one, who denounced Bacchus to the authorities.

Bacchus was arrested and brought before the judge and, when he proved steadfast in his confession of Christ, he was beheaded.  St. Bacchus was murdered in the eighth century for converting to Christianity and, as difficult as it is to believe, there are still today some parts of the world where a person’s life is at risk for embracing the Faith.  Most recently we have witnessed countless men, women and children martyred for their belief in Christ.  May they intercede for all of us as we pray for those who persecute others because of their religious preference or beliefs.