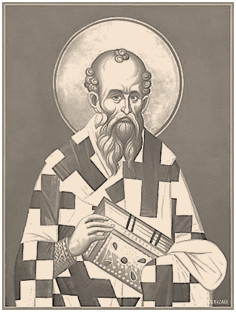 Born into a pious Christian family in the Mesopotamian city of Amida, Ephraim first distinguished himself as an officer in the Byzantine Army.  Because of his exceptional leadership qualities and his distinguished service to the Empire, Emperor Anastasias I appointed Ephraim as ‘Comes Orientis’, governor, of the Eastern Provinces.  He served in this capacity under two subsequent Emperor’s, Justin I and Justinian the Great.

In 527, the Emperor Justinian the Great began rebuilding the city of Antioch which had been nearly destroyed by an earthquake and fire the year before.  Nearly half the population perished in the catastrophe and those who survived had suffered greatly, losing their homes and possessions.  The Patriarch, Euphrasius died when his cathedral collapsed around him.  Because of his proven leadership qualities and his reputation as a pious, virtuous and compassionate man, the Emperor appointed Ephraim to oversee the reconstruction of the great city of Antioch.

Ephraim performed this work with diligence and great love, often joining the laborers in their work.  The workers respected him for his great compassion and the care he gave to their families and the victims of the earthquake.  Among the ordinary workers there was a certain bishop who had left his see for unknown reasons and was working as a common laborer. No one knew that the man was once a bishop. One day the bishop lay down to take a rest from the exhausting work and fell asleep. Ephraim glanced at him, and saw a flaming pillar rising above him and reaching up to heaven. Amazed and frightened, Ephraim summoned him and bound him under oath to reveal who he was. The man hesitated a long time, but finally admitted that he was a bishop and then foretold that Ephraim would be consecrated Patriarch of Antioch.  The bishop admonished Ephraim not to abandon his acts of charity and to defend the Faith against all heresies.  At that time the Church was rocked by heretical teachings.

Ephraim was indeed elected and consecrated as Patriarch. For his goodness, purity and zeal for the Orthodox Faith, the great gift of wonderworking was given him by God.  Once, in order to convince a heretic monk of the true Faith, he placed his bishop’s stole in the flames and prayed to God. The stole remained unharmed in the fire for three hours. When the monk saw this, he abandoned his heretical beliefs.

Patriarch Ephraim governed his flock confidently and wisely by the example of his life.  He defended the teaching of the Orthodox Faith on the union of two natures, the divine and the human, in the Person of our Lord Jesus Christ at the Council of Chalcedon (451) against the Monophysites. Throughout his patriarchate, Ephraim continued to defend the Church against heretical teachings with his preaching and writings.  In addition to his native Syriac, he had extensive knowledge of Greek and the Greek Fathers, and follows chiefly Cyril of Alexandria in his theology.  St. Ephraim of Antioch fell asleep in the Lord in the year 545 AD.

“Most of his many works are lost. We know the titles of them, however, from Anastasius  Sinaita (c. 700), John Damascene (d. about 754) and especially Photius (d. 891). Anastasius quotes passages from a work of Ephraim against Severus, the heretical Patriarch of Antioch (512–519). John of Damascus gives a passage from St. Ephraim, Archbishop of Antioch, taken from a work ‘On John the Grammarian and the Synod’.

Photius speaks of four books by Ephraim. The first consisted of sermons and letters, the second, and third contained a treatise against Severus in three parts and an answer to five questions about the Book of Genesis addressed to the author by a monk named Anatolius. The fragments quoted by Photius represent practically all that is left of Ephraim's writings.