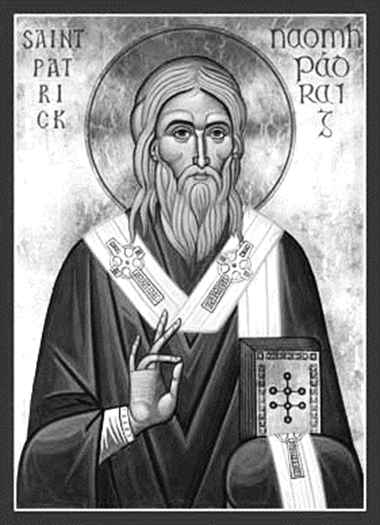 "Saint Patrick, the Apostle of the Irish, was seized from his native Britain by Irish marauders when he was sixteen years old. Though the son of a deacon and grandson of a priest, it was not until his captivity that he sought out the Lord with his whole heart. In his Confession, the testament he wrote towards the end of his life, he says, “After I came to Ireland — every day I had to tend sheep, and many times a day I prayed — the love of God and His fear came to me more and more, and my faith was strengthened. And my spirit was so moved that in a single day I would say as many as a hundred prayers, and almost as many at night, and this even when I was staying in the woods and on the mountain; and I would rise for prayer before daylight, through snow, through frost, through rain, and I felt no harm."

After six years of slavery in Ireland, he was guided by God to make his escape, and afterwards struggled in the monastic life in Aesir in Gaul [now France], under the guidance of the holy Bishop Germanus. Many years later he was ordained bishop and sent to Ireland once again, about the year 432, to convert the Irish to Christ. His arduous labors bore so much fruit that within seven years, three bishops were sent from Gaul to help him shepherd his flock, 'my brethren and sons whom I have baptized in the Lord -- so many thousands of people,' he says in his Confession.

His apostolic work was not accomplished without much 'weariness and painfulness,' long journeys through difficult country, and many perils; he says his very life was in danger twelve times. When he came to Ireland, as its enlightener, it was a pagan country; when he ended his earthly life some thirty years later, about 461, the “Faith of Christ was established in every corner." (Great Horologion)

The work of St Patrick and his brethren has been called the most successful single missionary venture in the history of the Church.  It is said of St Patrick that he chanted the entire Psalter every day.  Prayers and Blessings for a Very Happy and Blessed St. Patrick’s Day.