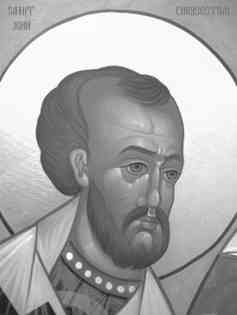 This greatest of Christian orators is commemorated not only today, but as one of the Three Holy Hierarchs (with St Basil the Great and St Gregory the Theologian) on January 30.

He was born in Antioch to pious parents around 345. His mother was widowed at the age of twenty, and devoted herself to rearing her son in piety. He received his literary and oratorical training from the greatest pagan teachers of the day. Though an illustrious and profitable career as a secular orator was open to him, he chose instead to dedicate himself to God. He lived as a monk from 374 to 389, eventually dwelling as a hermit in a cave near Antioch. Here his extreme ascetic practices ruined his health, so that he was forced to return to Antioch, where he was ordained to the priesthood. In Antioch his astonishing gifts of preaching first showed themselves, earning him the epithet Chrysostomos, "Golden-mouth", by which he became universally known. His gifts became so far-famed that he was chosen to succeed St Nectarius as Patriarch of Constantinople. He was taken to Constantinople secretly (some say he was actually kidnapped) to avoid the opposition of the Antiochian people to losing their beloved preacher. He was made Patriarch of Constantinople in 398.

Archbishop John shone in his sermons as always, often censuring the corrupt morals and luxurious living of the nobility. For this he incurred the anger of the Empress Eudoxia, who had him exiled to Pontus in 403. The people protested by rioting, and the following night an earthquake shook the city, so frightening the Empress that she had Chrysostom called back. The reconciliation was short-lived. Saint John did not at all moderate the intensity of his sermons against the abuses of those in power.  When the Empress had a silver statue of herself erected outside the Great Church in 403, accompanied by much revelry, the Patriarch spoke out against her, earning her unforgiving anger.

In 404 he was exiled to Cucusus, near Armenia. When Pope Innocent of Rome interceded on his behalf, the imperial family only exiled him further, to a town called Pityus near the Caucasus. The journey was so difficult and his guards so cruel that the frail Archbishop gave up his soul to God before reaching his final place of exile, in 407. His last words were "Glory be to God for all things."

Saint John Chrysostom is the author of more written works than any other Church Father: his works include 1,447 recorded sermons, 240 epistles, and complete commentaries on Genesis, the Gospels of Matthew and John, the Acts of the Apostles, and all the Epistles of St Paul.  The plight of the poor and the needy resonates throughout his writings and his sermons.  As a strong advocate and loud voice on their behalf he fostered greater charity and humanitarian outreach by the Church and the local society.

“Every day the church here (in Antioch] feeds 3000 people. Besides this, the church daily helps provide food and clothes for prisoners, the hospitalized, pilgrims, cripples, churchmen, and others. If only ten [other groups of] people were willing to do this, there wouldn't be a single poor man left in town.”