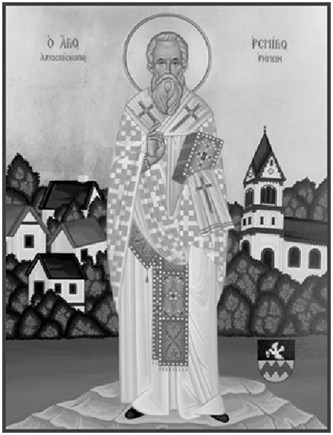 Remigius was born in 438 in northern Gaul [France]. After devoting himself to secular and sacred learning, he withdrew to a small house near Laon, to live in seclusion and prayer. But when a bishop was needed in Rheims, the clergy and people carried him off from his hermitage and made him their bishop. He was only twenty-two years old at the time.

The holy bishop soon became renowned throughout the territory. He converted pagans, brought heretics back to the Orthodox Catholic Faith and cared for the many who suffered at the hands of barbarian marauders. Wherever he went, miracles attended him. He healed the sick and demon possessed.  Once, when a town was on fire, he threw himself into the flames and quenched them. Birds would come to his table whenever he ate, and he would share his food with the wild beasts.

St. Remigius is known per the ‘Legend of the Baptism of Moribund the Pagan’, according to which a dying pagan asked for baptism at the hands of St. Remigius, but when it was found that there was no Oil of the Catechumens or sacred Chrism available for the proper administration of the baptismal ceremony, St. Remigius placed two empty vials on an altar and as he prayed the two vials miraculously filled with the necessary Oil of the Catechumens and Chrism.

In 482 the young warrior Clovis became leader of the Frankish tribes in that region. Though he was a pagan, he knew and admired Bishop Remigius, and he was married to a Christian, St. Clotilde (June 3). Once, when his army faced defeat, Clovis prayed to 'the God of Clotilde and Remigius' and won a great victory. This answer to his prayers convinced him of the truth of the Christian Faith, and he asked St Remigius to instruct him. Two years later he gathered all his chieftains in Rheims to attend his baptism. The baptism was accompanied by many miracles, seen by all in attendance. Two of the king's sisters and three thousand of his lords and soldiers were baptized at the ceremony. This event is considered the birth of France as a Christian nation.

In great old age, Bishop Remigius went blind, but miraculously recovered his sight. He reposed in peace at the age of 105, immediately after serving the Divine Liturgy.  Apparently when the sepulcher containing the body of St. Remigius was opened many years later, two small vials were found, the contents of which gave off an aromatic scent the likes of which was like nothing known to those present.

“O God, by the teaching of your faithful servant and bishop Remigius you turned the nation of the Franks from vain idolatry to the worship of you, the true and living God, in the fullness of the catholic faith: Grant that we who glory in the name of Christian may show forth our faith in worthy deeds; through Jesus Christ our Lord, who lives and reigns with you and the Holy Spirit, one God, for ever and ever. Amen.”