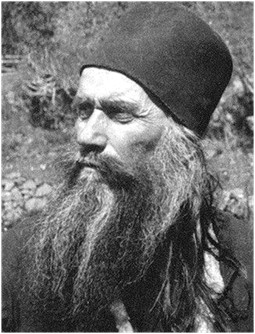 He was a Russian peasant who traveled to Mt. Athos and became a monk in the Russian Monastery of St. Panteleimon. He lived so simply, humbly and quietly that he might be forgotten had not Fr. Sophrony (Sakharov) become his spiritual child and, after the Saint's repose, written a book describing his life and teaching: St. Silouan of Mt. Athos, one of the great spiritual books of our time. It was through Fr. Sophrony's efforts that St. Silouan was glorified as a Saint.

Following a vision of Christ Himself, St. Silouan withdrew to a hermitage to devote himself entirely to prayer; but he was called back to serve as steward to the monastery. Though he now supervised some two hundred men, he only increased his prayers, withdrawing to his cell to pray with tears for each individual worker under his care. For more than fifteen years he struggled with demonic attacks during prayer until he was almost in despair. At this point Christ spoke to him in a vision, saying 'The proud always suffer from demons.' Silouan answered 'Lord, teach me what I must do that my soul may become humble.' To this he received the reply,  ‘Keep thy mind in hell, and despair not.’

Silouan made this his discipline in every moment of his life, and was granted the grace of pure prayer. He said that if he ever let his mind wander from the fire of hell, disruptive thoughts would once again plague him. In his humiliation he was filled with a pervasive love for all — he said many times that the final criterion of true Christian faith is unfeigned love for enemies, and that 'to pray for others is to shed blood.'

“The Lord has entrusted much to us—He entrusted to us the truth about Himself! It is truth, which this cruel, unjust, and self-willed tyrannical world has forgotten. We are called here, amidst suffering and lies, to justify the Creator’s goodness! The Savior has entrusted to us the testimony of His measureless mercy for mankind, about how He was crucified, endured cruel torments and scourging—proving that He has not abandoned us, has not alienated His fallen creation, but rather with the entire depth of His boundless love desires our salvation. This means that in the eyes of the all-good Creator, those sorrows and sufferings that come into our lives have beyond all doubt some good meaning; and that means that we must also come to know them as a testimony to His mercy. And we must not only come to know them, but also accept them with all our hearts, and submit ourselves to the Creator’s Providence, even though we may not fully understand what it is.”

St. Silouan demonstrates that the Church's true Theologians are those who manifest in their own lives the fruits of the Church's hesychastic spirituality, however insignificant they may appear to the eyes of the world.