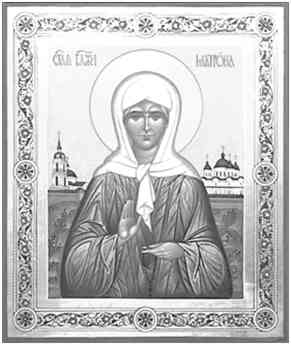 Matrona was born in 1881 to a poor peasant family in the village of Sebino in Tula Provence, Russia. Though she was born blind — her eyes were without pupils — she showed a gift of spiritual insight from an early age, and by her prayers healed many who came to her.

Her family lived near the beautiful Church of the Dormition of the Mother of God, which served seven or eight surrounding villages. Matrona’s parents were known for their piety and, as they often attended Divine services together, Matrona “grew up” in church. When Natalia didn’t know where the young girl was, she often found her there, standing quietly in her usual place, behind the door near the west wall. She knew the church prayers and hymns and often sang along with the choir.

At about the age of fourteen she made a pilgrimage to several Russian holy sites. When she came to Kronstadt to receive the blessing of St. John (20 Dec.), the holy priest, who had never met her, cried out "Matrona, come here!" and proclaimed "She will be my heir, the eighth pillar of Russia.

At the age of seventeen she was stricken with paralysis and was never able to walk again. For the rest of her life she lived in a room filled with icons, where she would sit cross-legged on her bed and receive visitors. She never bemoaned her blindness or paralysis; once she said "A day came when God opened my eyes, and I saw the light of the sun, the stars and all that exists in the world: the rivers, the forests, the sea and the whole creation."

When still a teenager Matrona predicted the Communist Revolution in Russia. She described in detail how churches would be desecrated and plundered, how believers would be persecuted, and what a bloody struggle would unfold for the land.

Matrona was forced to lead a clandestine life in Soviet years. In 1925 at the age of 40 she was forced to leave her village because of her two brothers who were both staunch communists and atheists. They were irritated by the ceaseless procession of the needy and ailing coming to their home because of Matrona. Knowing the persecutions that Communist authorities subjected Orthodox Christians to, the brothers feared for their own lives and banished Matrona and their mother.

She settled in Moscow with her mother. After the death of her mother in 1945, she moved frequently, living secretly in the homes of the faithful. Despite this, throngs of believers found their way to her for counsel and healing. The Communist authorities, knowing her holy influence, sought many times to arrest her; but she always knew in advance when they were coming, and would be moved to a different secret location. She fasted much, slept rarely, and it is said that her forehead was dented by the countless signs of the Cross that she made.

Of the persecution of the Church by the Communists, she simply said that this was due to the sins and lack of faith of the Christians, and added, "Difficult times are our lot, but we Christians must choose the Cross. Christ has placed us on His sleigh, and He will take us where He will.

Having foreseen the day of her death, she said, "Come close, all of you, and tell me of your troubles as though I were alive! I'll see you; I'll hear you, and I'll come to your aid." She reposed in peace on April 19, 1952. Many miracles occurred at her tomb. In 1998 her relics were moved to the women's Monastery of the Protecting Veil of the Mother of God, where thousands of Orthodox Christians come to venerate her and, as she asked, to bring her their problems and concerns as though she were alive on earth. She was glorified by the Church of Russia in 1999.

“Thou wast enriched with the gift of foresight and wonderworking and hast been adorned with an incorruptible crown from the Lord. Wherefore, we offer thee crowns of praise, in gratitude crying out: Rejoice O righteous mother Matrona, fervent intercessor before God for us!”