Our Holy Mother Brigid of Kildare 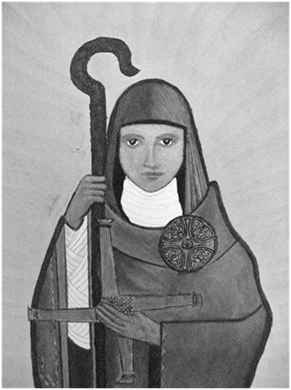 Her name is also spelled Brigit or Bridget] She is considered the patroness of Ireland and the equal to St Patrick (March 17).  Brigid was born in Ulster in the north of Ireland in 451 of a noble Irish family. Her mother was Brocca and her father was Dubhthach, the chieftain of Leinster. Both had been converted by St Patrick.  As a teenager she showed great care and devotion to the poor and is recorded as healing many of their illnesses.  She established shelters to feed and house the homeless, she even gave away her father’s belongings to those in need.

She was uncommonly beautiful, and her father planned for her to marry the King of Ulster. But at the age of sixteen she asked her Lord Jesus Christ to make her unattractive, so that no one would marry her, and she could devote herself to Christ alone. Soon she lost an eye and was permitted to enter a women’s monastery. On the day she took monastic vows, she was miraculously healed, and her original beauty was restored.

In 480, near Dublin, Brigid built a cell under an oak tree, which was called Kill-dara, or Cell of the Oak. Soon seven other young women joined her, and they established the monastery of Kill-dara. In time her monastery became the cathedral church for the city of Kildare. The monastery grew rapidly and became a double monastery with both men's and women's cloisters, with the Abbess, St. Brigid ranking above the Abbot and the local bishop; from it several other monasteries were planted throughout Ireland. (Combined men's and women's monastic communities are virtually unknown in the east, but were very common during the golden age of the Irish Church – late 4th to early 10th century). Her monastery became the center of learning for the entire country.  The nuns and monks were renown for their art, metalwork and manuscript illumination.  They also operated a brewery. For centuries the Abbess of Kildare was regarded as the superior general of all monasteries in Ireland and accorded honor equal to that of a bishop.

Saint Brigid predicted the day of her death and fell asleep in peace on 1 February 525, leaving a monastic Rule to govern all the monasteries under her care.  She was buried to the right of the altar at the Cathedral of Kildare.  During the Viking raids, her relics were removed to Columba and then in 1185 buried at the Cathedral at County Down in northern Ireland. The account of her life was written in 650 by the monk St. Broccan Cloen. During the Middle Ages her veneration spread throughout Europe, especially to Portugal.