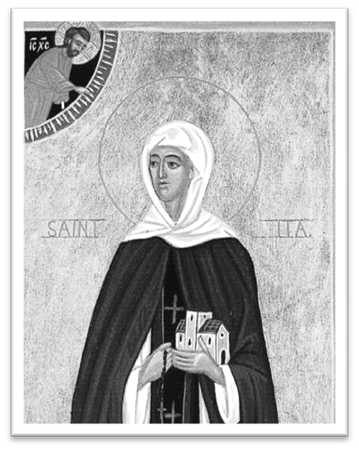 The gentle and motherly St. Ita was descended from the high kings of Tara. She was born in 480 and her parents, Cennfhaola and Necta were pious Christians. Ita was said to embody the six virtues of Irish womanhood – wisdom, purity, beauty, musical ability, gentle speech and needle skills. From her youth she loved God ardently and shone with the radiance of a soul that loves virtue. Because of her purity of heart, she was able to hear the voice of God and communicate it to others. Despite her father's opposition she embraced the monastic life in her youth. In obedience to the revelation of an angel she went to the people of UiConaill in the southwestern part of Ireland. While she was there, the foundation of a convent was laid. Her sister Fiona also went with her and became a member of the community. It soon grew into a monastic school for the education of boys, quickly becoming known for its high level of learning and moral purity. Her students were taught "Faith in God with purity of heart; simplicity of life with religion; generosity with love. The most famous of her many students was St. Brendan of Clonfert (May 16). The great Navigator, St. Brendan, visited her between his voyages and always deferred to her counsel. Brendan is believed to have asked her what three things God loved best. "True faith in God and a pure heart, a simple life with a religious spirit and open-handedness inspired by charity," she answered. The three things God most detested were a “scowling face, obstinacy in wrongdoing, and too great a confidence in the power of money”. St. Ida dedicated herself to prayer, fasting, simplicity and cultivating a gift for spiritual discernment. She was also endowed with the gift of prophecy and was held in great veneration by a large number of contemporary saints, men as well as women. Ita had a special gift for guiding people in holiness and was much sought after as a spiritual director. During this period of Christianity, the Celtic Church was more advanced than other churches at the time in recognizing qualities of spiritual leadership in women and in encouraging women in this role. St. Ita was, in fact, the abbess of a double monastery of men and women. Numerous miracles are recorded of her. She is also said to be the originator of an Irish lullaby for the infant Jesus, an English version of which,“St. Ida’s Vision”, was set for voice and piano by the American composer Samuel Barber. It seems she died of cancer. When she felt her end approaching she sent for her community, and invoked the blessing of heaven on the nuns and monks, the Bishop, the clergy and laity of the district. She went to the other world in great holiness to dwell forever with the risen Lord in the year 570.