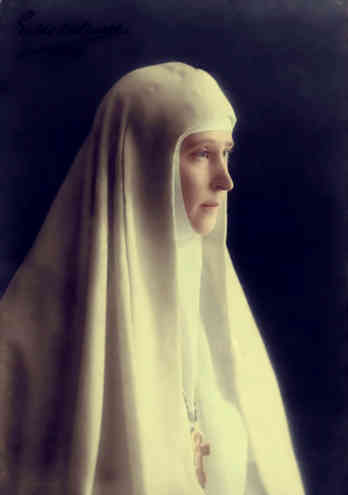 Elizabeth was born ‘Princess Elisabeth of Hesse and the Rhine’ on 1 November 1864. She was a German princess of the House of Hesse-Darmstadt.  She was a grand-daughter of Queen Victoria of England and the older sister of the Tsarina Alexandra (wife of Tsar Nicholas II).

In 1884, she married the Russian Grand Duke Sergei Alexandrovich of Russia, a son of Emperor Alexander II of Russia and Princess Marie of Hesse and the Rhine.  Elizabeth was also a maternal great-aunt of Prince Philip, Duke of Edinburgh; the husband of Queen Elizabeth II of England.

Before her marriage Elizabeth converted from Lutheranism to the Russian Orthodox faith.  She became famous in Russian society for her beauty and charitable works among the poor.  In 1905, a member of the ‘Socialist Revolutionary Party’ assassinated her husband, Grand Duke Sergei, with a bomb.  Elizabeth publicly forgave Sergei's murderer, Ivan Kalyayev, and campaigned, without success, for his pardon. She begged the assassin,'Do not listen to your pride. Repent... and I will beg the Sovereign to give you your life. I will ask him for you. I myself have already forgiven you.'On the eve of revolution, she had already found a way out; forgiveness! Forgive through the impossible pain and blood -- and thereby stop it then, at the beginning, this bloody wheel. By her example, Elizabeth appealed to society, calling upon the people to live in Christian faith.

Grand Duchess Elizabeth had a cross erected at the site of her husband’sassination, bearing the inscription "Father, forgive them, for they know not what they do." After the Communist revolution, the cross remained standing because of the deep devotion the people of Moscow had for Sr. Elizabeth.  Sometime later, it was desecrated and personally torn down by Lenin himself.

Following the assassination, Grand Duchess Elizabethdeparted the Imperial Court and became a nun taking monastic vows and withdrawing from the world.The nun Elizabeth founded the Convent of Saints Mary and Martha where she served as superior, devoting her time to prayer, fasting, and caring for the sick and the poor and to helping the downtrodden of Moscow.  During the First World War, Elizabeth served as a nurse along with the other nuns, treating wounded soldiers returning from the front.

During the Russian Revolution and Civil War, she and her nuns was arrested by the Bolsheviks and taken to the Ural Mountains.  Elizabeth and several others were martyred on 18 July 1918 by being thrown alive down an abandoned mine-shaft. When the fall did not kill them, soldiers threw hand grenades down the shaft to complete their work.  It is recorded that Elizabeth was singing the Cherubic Hymn as she lay dying.  Strips of material from her nun’s habit were found as bandages wrapped around the wounded and dying.

Her relics were recovered and taken to China, then to Jerusalem, where they were deposited in the Convent of St Mary Magdalene. When her reliquary was opened in 1981, her body was foundto be incorrupt, and gave off a sweet fragrance of flowers.  In 1981 St. Elisabeth was canonized by the Russian Orthodox Church Abroad, and in 1992 by the Moscow Patriarchate.