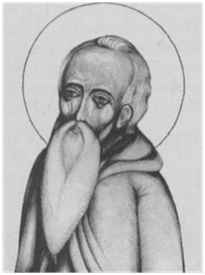 On March 30 we commemorate a bishop of Downpatrick, Saint Fergus. His feast is attested by both the Irish calendars and the annals of the Saints of Hibernia.  Fergus, or Fergussius, was a distinguished son of Aengus. His genealogy goes back six generations to Coelbadh of Ulster, King of Ireland.

St. Fergus was born in Ulster in the early part of the sixth century.  As a young boy he was educated by the hereditary scholars of his clan and by the local monastics.   As a young man he decided to retire to the ‘wilderness’ to pursue a solitary life devoted to prayer and fasting.  He built a stone cell at a place called Killmbian, in the parish of Kilmore in County Down, where several hermit monks lived. There he took up the hermitic life with great zeal.

Inspired by his reputation as a holy and wise man, others soon joined Fergus in the ‘wildernesses’.  A monastery was developed at this place as the number of solitaries and monks grew. Because of his piety and devotion to the Gospel, St. Fergus was asked by the other monks to serve as their Abbot. He soon built a church at Killmbian and sent his monks into the countryside to minister to the faithful there.  From the church of Killmbian, Fergus was called to preside over the cathedral church of Downpatrick, the burial place of St. Patrick. It is thought, that St. Fergussius was the first bishop of Downpatrick.

Near Downpatrick are the celebrated Struell Wells, which seem to have been resorted to by pilgrims, from times very remote, and where numberless miraculous cures have been effected.  It is supposed, that St. Patrick himself often resorted to the Holy Well at Struell, for penitential purposes, and to sing Psalms while in retreat at Downpatrick.  In imitation of the great Saint, Bishop Fergus regularly visited the Holy Well to fast and pray and to minister to the needy and the infirmed.  St. Fergus governed the diocese with great prudence and sanctity, until the day of his death, which took place on the 30th of March, A.D. 583, in the sixteenth year of the reign of Aidus, King of Ireland.