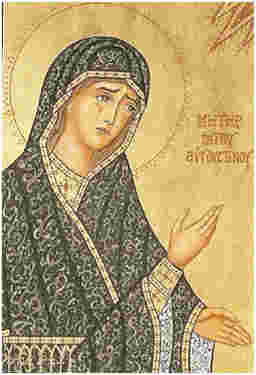 St. Monica was born in the year 322 in Tagaste, a Barber tribal village in Northern Africa in what is now Algeria. Although her parents were Christians, they decided to marry her to a pagan Roman official named Patritius.

When Monica entered Patritius’ household, she had to contend with a husband who was both immoral and unfaithful. The household servants disrespected her and made rude comments behind her back. These comments influenced her mother-in-law, who lived with her, and she turned against Monica. Through the years of emotional abuse, Monica never complained and even urged other women to respect and tolerate their husbands. Because of her meek and submissive nature Monica avoided physical abuse by her husband in a time when other women were regularly seen with bruises on their faces from being struck by their husbands.

Monica bore her husband two sons, Augustine and Navigius and a daughter, Perpetua. Although she was not allowed to baptize her children, she prayed fervently for her household. Through her prayers, her husband eventually converted to Christianity and was baptized. He repented of his immorality and adultery and lived a pious life until his death about a year later.

Monica’s son Augustine, led a life of carnal pleasure and worldliness in his youth. He had an illicit relationship with a young girl and fathered at least one illegitimate child. Monica never despaired, and constantly prayed that her son would someday repent and be converted to the Faith. Eventually he was converted and accepted baptism and repented of his evil life. In time, Augustine became a priest and was later consecrated as Bishop of the African city of Hippo. In remembrance of his conversion and baptism, Augustine wrote the book “The Confessions”. Most of what is known about St. Monica is from this book. After his death, Augustine was canonized a saint of the Church.

After his conversion, St. Monica and her son Augustine shared about six months of peaceful and prayerful life together before she passed away peacefully in the year 387 at the age of fifty six.

The feast of St Monica is celebrated on the fourth of May in the Orthodox Church. She is considered the patron saint of battered women, mothers whose children have gone astray, and of housewives.