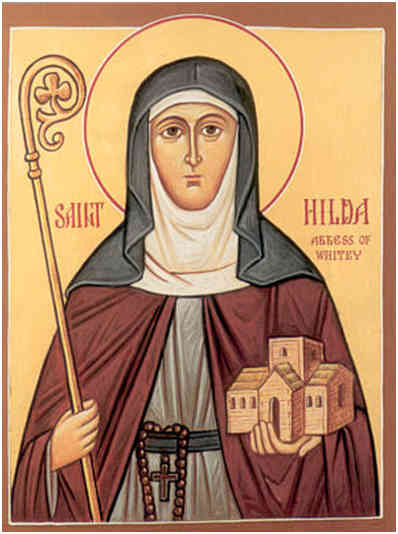 one of the first missionaries sent to the British Isles.  At the age of thirty-three she renounced the world and entered monastic life.  At first, she sought to enter a monastery near Paris, but she was called back to her homeland by St. Aidan, Bishop of Lindisfarne, who, discerning her already-apparent spiritual gifts, set her as Abbess of a local monastery.

As her gifts of discernment and spiritual guidance became more widely-known, she led larger monasteries, finally establishing the Monastery of Whitby in 657. The Saint spent the next thirty-three years directing the Monastery, which became a beacon of Christian life throughout the British Isles and beyond.

The Monastery was unusual by modern standards in that it comprised both a women's and a men's monastic house, with Mother Hilda as spiritual head of both. The community became a training-ground for priests and bishops who went on to spread the Gospel of Christ throughout the British Isles.

Commoners, kings and Bishop Aidan himself came regularly to her for spiritual counsel, and she was in her own lifetime regarded as the Spiritual Mother of the country. For the last six years of her life she was afflicted with an unremitting burning fever, but she continued her holy work undeterred until her repose in 680. At the moment of her death, Saint Begu, in a different monastery, was awakened by a vision of Hilda's soul being borne up to heaven by a company of angels.

The Synaxarion concludes, "Saint Hilda, like her contemporaries Saint Etheldreda (23 June) and Saint Ebba (25 Aug.), belongs to that monastic company of women of royal birth who exercised a formative influence in the English Church of the seventh century, but she is also a rare example of a spiritual Mother, who received from God the gift of directing not only nuns but monks and bishops as well; for in the Lord Jesus there is neither male nor female, but a new creation (Gal. 3:28)."