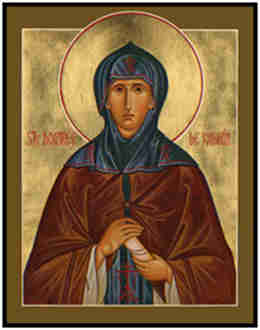 St. Dorothy of Kashin was born in 1549 of a noble Russian family. From the age of twelve, she lived in an area of civil unrest which was subject to rebellion, invasion, and plague. She married Theodore Ladegin, and they lived north of Moscow in the city of Kashin. Dorothy’s husband was killed early in the 17th century while defending the city in a battle against Polish and Lithuanian invaders. She was close to sixty years old at that time.

After her husband’s death, St. Dorothy decided to leave the world and enter the women’s monastery of the Meeting of the Lord in Kashin. Located in this same monastery were the relics of St. Anna of Kashin. The monastery had been sacked along with the city, so conditions were difficult.

St. Dorothy built a small cell in the ruins, and there she engaged in ascetical struggles. She found the Korsun Icon of the Theotokos in the debris and kept it in her cell. This icon later became known for its miracles.

As she grew older, she preferred to remain in the semi-wilderness around Kashin. She tried to help those who were suffering by encouraging and consoling them. Whatever money she had left after her husband’s death was used to restore the monastery or to benefit the poor. Although she had once lived in luxury, St. Dorothy was now reduced to poverty, enduring every affliction and sorrow with great patience. She prayed continually for her husband, her monastery, and the city of Kashin.

Once the danger to the community had passed, the other nuns came back to the monastery. St. Dorothy’s holy and virtuous life also inspired other women to become nuns. They all wanted her as their abbess, but St. Dorothy refused, preferring to live as a humble nun. However, she was an example to the sisters for the rest of her life.

In 1615, St. Dorothy received the Great Schema [the highest monastic order] and increased her spiritual efforts. She fell asleep in the Lord when she was about eighty on September 24, 1629 after living in the monastery for more than twenty years. She was buried on the north side of the monastery’s church. A white memorial stone was placed over her grave, and the inscription was clearly legible until the 20th century. Following the Communist revolution, the nuns were arrested and many died in exile in Siberia. The Monastery was converted into a factory and the main church into a mill. Later it was used as an asylum for mentally disabled children.  Following WW2 the site was abandoned and fell into complete neglect.  Following the collapse of the Soviet Union in 1990, the property fell into private hands and today, the Monastery including the seventeenth century Cathedral church and tomb of St. Dorothy is for sale; asking price is 1.7 million rubles [approx $54,000].  Many miracles continue to take place at the grave of St. Dorothy for those who come to her in faith.