Saint of the Month - Saint Gall, the Enlightener of Switzerland (640), October 16

Gall was born in Ireland in 540 to wealthy Christian parents, his older brother was the monk Saint Deicolus. Gall’s parents sent him to the Monastery of Bangor for his education. There he embraced the ascetical life and became a monk like his brother. The two brothers were among the twelve monks who traveled with their spiritual father St. Columbanus as missionaries to Gaul [France].

In time some of the group traveled into pagan lands, up the Rhine River to Lake Zurich. There the monks settled on Lake Constance around a chapel dedicated to St. Aurelia, which had been taken by the pagans as a shrine; they cleansed and deconsecrated the chapel, which became the center of their new monastery. 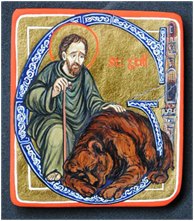 Saint Gall lived as a hermit, serving the brethren by making nets and catching fish. In 612 St. Columbanus went on to Italy with most of his disciples, leaving St. Gall and a few others to continue their life. When St. Gall delivered Frideburga, the daughter of a local duke, from a demon, he offered the saint a tract of land on the shores of Lake Constance; here was founded the monastery that in later times bore St. Gall's name.

The most popular story about St. Gall says that once he was travelling in the woods of what is now Switzerland. One evening he was sitting down warming his hands at a fire. A bear emerged from the woods and charged. The holy man rebuked the bear, so awed by his presence it stopped its attack and slunk off to the trees. There it gathered firewood before returning to share the heat of the fire with St. Gall. The legend says that for the rest of his days St. Gall was followed around by his companion the bear. They say that St. Gall would often play the ‘bodhran’ or Irish drum and that the bear would dance for him.

At various times, the holy St. Gall refused calls to become a bishop or to become Abbot of the great monastery at Luxeuil. To all such requests, he answered that he would prefer to serve than to command. He continued living in his isolated monastic community until he reposed in peace in 640, at the age of ninety-nine. In later years, and continuing well into the middle ages, the Monastery of St. Gall became famed for the holiness of its monks and its extensive library.