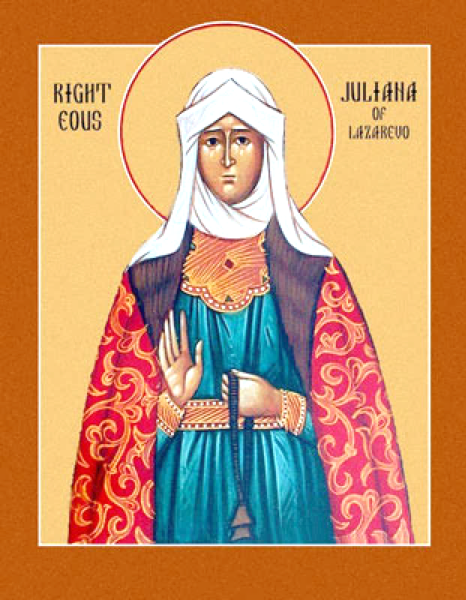 The daughter of a devout and generous official in the Tsar's court, Juliana was orphaned at the age of six and reared by relatives. At the age of sixteen she was given in marriage to George Ossorguin, a nobleman who lived on an estate at Lavarevskoye, Russia.

The couple were a model of Christian marriage. When her husband was at home, they would devote much of their time to praying together. When he was away in service to the Tsar, she would devote whole nights to prayer and handiwork. Since she was not free to give away her fortune as she desired, she earned money for almsgiving by the work of her hands, something unheard-of for a lady of her rank. When anyone died in the village she prayed for them at length, and if they were indigent she would pay for their funeral.

When two of the pious couple's sons died, Juliana asked her husband to let her enter a monastery. He disagreed because they had other young children who needed her care; but he consented for her to live a monastic life under their roof. From this time forward, she increased her fasts, spent her nights in prayer, and slept on the floor. When her husband died ten years later, her wealth was at her own disposal, and she devoted all of it to works of mercy. When her family criticized her for depriving herself so harshly, especially for her severe fasting, she answered 'Whatever my body loses now won't be food for worms later. What is the point of fattening the flesh only to lose the soul?'

From 1601 to 1603, Russia was struck for three years by the worst famine in its history, so severe that men ate human flesh in their desperation. Saint Juliana sold all her livestock, gave away all the provisions in her barns, and freed all her serfs who wished to leave. Those who remained became her family, with whom she shared all she had. By her prayers, bitter and inedible plants became palatable so that they could be made into bread. The holy woman, despite almost killing privation, never complained, but seemed more cheerful than ever before.