Saint of the Month - Blessed Photis Kontoglou the Iconographer, July 13 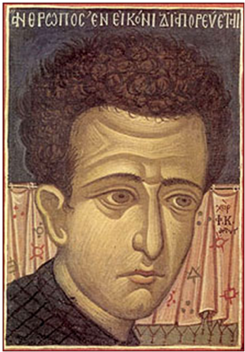 He is called "Blessed Photis" but has not yet been officially glorified as a saint of the Church. In the twentieth century, he almost singlehandedly restored the practice of true Byzantine icon painting to the Church. He was born on 8 November 1895 at Kydoniai (modern day Ayvalık, Turkey) one of the many Greek villages of Asia Minor.

He came from a very devout Christian family that maintained a chapel in their home that contained relics of the Saints and several ancient Icons. Many of his ancestors were priests, nuns and monks. One of his uncles who greatly influenced his life was the Elder Stephanos of St. Paraskevi Monastery at Kydoniai.

Following his education in Kydoniai, Photis enrolled in the Athens School of Fine Arts where he studied painting.  He then went to study art and literature in Paris where he refined his painting techniques and style. He remained in Paris throughout the First World War. He also pursued studies as a writer and published his first of several books, the novel ‘Pedro Kazas’ in Paris in 1919.

Photis Kontoglou returned to Kydoniai following the Armistice and married Maria Hatzikambouri, who was also from there.  The family was forced to immigrate to Greece during the "exchange of populations" of 1923, when more than a million Greeks were driven from Turkey and resettled in Greece. He continued his literary and art studies in Athens where he was increasingly drawn to Byzantine iconography. He soon published several works including the life and writings of St. Isaac the Syrian and other mystics of Syria and Mesopotamia. At this time the practice of iconography had almost disappeared: he learned the iconographic ethos and technique by copying ancient models and studying with the few monks on Mount Athos who still practiced the traditional art form. 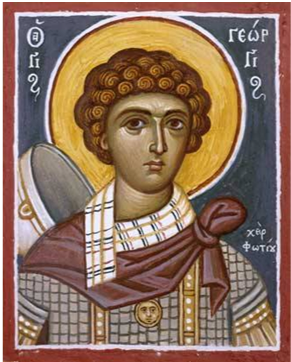 Initially his work was scorned, since low standards for icon painting had come to dominate the art of the Church.Slowly, through his tireless labors, an understanding of Orthodox iconography was restored to the Church.  His influence gradually spread from Greece throughout the Orthodox world. He remained in Athens and he delivered classes of painting at the National and Kapodistrian University of Athens. Among his students were some of the most important modern Greek painters. Married, he lived his life in poverty, often donating his work to churches or painting for nominal fees. His deeply spiritual writings are greatly honored in the Church.  Today, Photis Kontoglou is recognized as the ‘greatest Icon painter of the 20th century’. Depicted here is an icon of St. George painted by Photis Kontoglou.