Saint of the Month - Saint Dosithea, Recluse of the Kiev Caves, September 25

She was born in Ryazan province, Russia in 1721 into a family of wealthy landowners named Tiapkin. Her birth name was Daria. During her childhood, she spent much time with her grandmother the nun Porphyria, from whom she acquired a love for the monastic life and spiritual struggle. Porphyria eventually received the rank of Great Schema nun and entered a more reclusive life of prayer and silence. The child Daria began her formal education under her parent’s supervision while continuing with her spiritual life and trying to live as much like a nun as she could at her home. 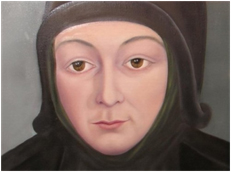 At age 15 her parents decided to arrange a marriage for their daughter. Fearing that her spiritual journey would be derailed she foiled their plans by running away from home. She cut off her hair and dressed in the tattered clothes of a peasant and changed her name to Dositheus. In the disguise of a young boy she entered the Monastery of St. Sergius. Three years later she fled the monastery to avoid discovery by her parents and went to a monastery at Kiev but she was turned away because she had no passport. She retreated to the forest and took up the hermit's life in a cave, living only on bread, water and wild plants.

Before long her spiritual gifts became known, and the advice and guidance of 'Dositheus the Hermit' was sought out by many of the faithful. Pilgrims began to flock to her cave. She would speak to her many visitors through a small window that did not allow them to see her clearly. When the Empress Elizabeth visited her in 1744, she requested that 'Dositheus' officially receive the monastic tonsure. When the young Prochor Moshnin, who was later known as St. Seraphim of Sarov
visited her, she foresaw his holy future, blessed him and directed him to the Monastery of Sarov, instructing him to practice the Jesus Prayer ceaselessly.

The hermit life was later banned in Russia by Imperial decree and 'Dositheus' returned to Kiev to live in a remote cell at one of the monasteries. When she discerned that the time of her death was near, she left her cell and greeted the monks. The next day she was found on her knees in her cell before an icon, with a piece of paper in her hand reading 'My body is ready for burial. I beg you not to touch it and to bury it in the usual way.' Only in preparing her for burial was it discovered that she was a woman. 'Dositheus the Hermit' is counted as one of the revivers of the Orthodox spiritual tradition known as Hesychasmin Russia, where it had been almost forgotten even among monastics. Her grave soon became a place of pilgrimage and sacred center of prayer. Her tombstone’s plaque reads simply:“In the year 1776, 25 September, Dositheos reposed.” She was proclaimed a Saint by an Act of the Holy Synod in 1993. Her name was feminized to St. Dosithea and she is known as The Recluse.