Saint of the Month - St. Corona of Damascus - November 24

It’s ironic to discover an early saint and martyr of the Church by the name of Corona.  Thanks to a recent post from our former Pastoral Assistant Sarah Livick-Moses and her husband J.T., I learned of this curious saint and attempted to research her life.  The following is an edited compilation of what I could glean about her from several sources.  Her name means ‘crown’ in Latin and the current COVID-19 virus is a type of the coronavirus strain so named because of its ‘crown’ like structure.  Her name, in reference to the Latin word for crown, surely refers to her martyrdom, as she received the “martyr’s crown.” 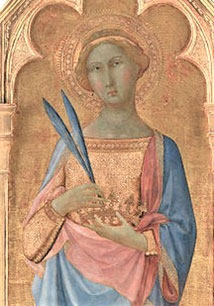 St. Corona was an early Christian martyr of the mid second century who lived in the Roman province of Syria.  In Latin her name means ‘crown’ the Greek translation of her name is ‘Stephanie’ – sometimes she’s referred to as St. Stephanie.  There are several early Latin and Greek accounts of her life.  According to some accounts she was the teenage wife of an Imperial Roman soldier named Vincent who was stationed at Damascus.  Vincent’s close friend and fellow soldier Victor was arrested for his Christian faith during the persecution under Emperor Antonius Pius in 165 AD.

Victor was imprisoned and tried by a notorious Roman judge named Sabastian.  Refusing to deny his faith in Christ, Victor was brutally tortured even having his eyes gouged out.  Corona, who was also a Christian, witnessed his torture and admired his steadfast faith.  She attempted to comfort and care for him in prison.  While ministering to Victor she had a vision of two martyrs’ crowns descending from heaven.  She related this vision to all her acquaintances and the story eventually became known to the Roman authorities who quickly had Corona arrested and interrogated.  When asked her name, she boldly answered ‘my name is Christian’.

Victor was beheaded shortly after Corona’s arrest.  Corona’s husband, Vincent was also arrested for his Christian faith, tortured and executed.  Vincent and Corona had been married for one year and four months.  Before the judge, Corona refused to deny her faith in Jesus Christ and she was sentenced to death.  Corona was tortured and tied by her hands and feet between two bent palm trees and torn apart when the trunks were released.  The date of her martyrdom is recorded as 24 November in the year 165.

Fellow Christians gathered and preserved the relics of the three holy martyrs and centuries later they were declared Saints and a church in their honor was dedicated in Antioch.  During the Crusades the relics of St. Corona were taken to Germany and enshrined at the Imperial cathedral in Aachen.  She became popular in Austria and Bavaria in the late middle-ages and several churches there are named for her.  When the Black Death or bubonic plague devastated Europe in the early 14th century the people of this region called upon St. Corona for her intercession and protection. Reportedly many villages were spared the ravages of that epidemic.  Because of this she is regarded as the Patron Saint and Protector from Plagues and Epidemics.  About St. Corona, we can say that Divine Providence truly has given her to us at this time, and that she is surely praying for us and our world in this dire situation.

Through the prayers of the Holy Martyr and Saint Corona,

Lord Jesus Christ Our God, help us and preserve us, Amen.

“O Lord our God, Healer of our bodies and souls, visit us now with Your loving-kindness and stretch forth Your hand of healing. Rescue us from all sickness, and heal us of every disease and fever.  Deliver each of us, our parish, this city and every city and country from every plague and epidemic through the intercession and prayers of Your glorious Martyr and Saint Corona.  We ask this as we pray and honour You, our most holy Father, gracious Son and life-giving Holy Spirit, now and forever. Amen.

Together let us honor the Athletes of Christ / memorable Victor and noble Vincent / and with them we praise divine Corona /    by their contests they destroyed the enemy / By their supplications, O Christ our God, have mercy on our souls.

Today the Church honors the Great Martyrs and Athletes / the struggles of Victor, Vincent and Corona / She cries out and glorifies the Lover of mankind.