Saint Lawrence of Canterbury, was the second bishop of Canterbury in England and a missionary who played a large part in establishing the Anglo-Saxon church.

In 597 Pope St. Gregory I the Great appointed the Benedictine monk Laurentius, to the first Anglo-Saxon mission aimed at converting pagan England to Christianity. Nothing else is known of his early background or history.  The mission to England was led by St. Augustine, who later became the first bishop of Canterbury.

St. Augustine, Laurentius and their fellow missionary monks endured persecution and hostilities by the Anti-Christian Britons while fruitlessly trying to convince the Celtic Christians of Scotland and Ireland to abandon their local traditions and to adopt Roman practices.  After several years the local King of Kent, Ethelbert converted and was baptized through the preaching of St. Lawrence.

The medieval chronicler St. Bede says that St. Augustine sent St. Lawrence back to Pope St. Gregory I to report on the conversion of King Ethelberht of Kent and to carry a letter with questions for the pope.  St. Gregory's reply to St. Augustine's questions is contained in the Libellus responsionum, that Bede included in his Historia ecclesiastica gentis Anglorum.  In that letter, Pope St. Gregory praises the Queen Bertha for her part in the conversion of her husband and for the intercession of the priest Lawrence. 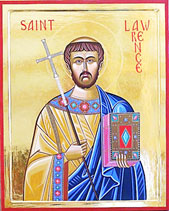 St. Lawrence was consecrated bishop by St. Augustine and succeeded the great missionary as bishop in about 604.  In 613 St. Lawrence consecrated the monastery church built by St. Augustine in Canterbury, and dedicated it to Sts. Peter and Paul; it was later renamed as St. Augustine's Abbey, Canterbury. St. Lawrence also wrote to the bishops in the lands held by the Scots and by the Irish, urging them to hold Easter on the day that the Roman church celebrated it, instead of their traditional date corresponding to the Eastern Christian date, part of the Easter controversy. The letter is also preserved in Bede's history. St. Lawrence in 609 stated that St. Dagan, a native Celtic bishop, would not eat with him or share a roof with the archbishop, due to the differences between the two Churches.

St. Lawrence died on 3 February 619, and was buried in the abbey of Sts. Peter and Paul in Canterbury, later renamed St. Augustine's. His shrine was in the axial chapel of the abbey church, flanking the shrine of St. Augustine.

St. Lawrence came to be regarded as a saint, and was given the feast day of 3 February.  A Vita (or Life) was written mainly based on information in St. Bede.  St. Lawrence's tenure as archbishop is mainly remembered for his failure to secure an agreement with the Celtic church, and for his conversion of Eadbald the son of King Ethelbert.