Born in Ireland, this holy man was a brother of St. Fintan of Doone, whether senior or junior to him, is unknown. He is sometimes called Finlugh, Findlugn, Lugad, and Lagan. The latter forms appear to represent his original name, Lagan.   The prefix Finn signifies "white" or "fair," and may refer to his complexion or the colour of his hair.   Initially, Finlog was a disciple of his brother Fintan, at the monastery of Dunbleisque in Ireland.  Here, the monks predicted that Finlog would "pass over the sea, and die an exile from the country of his birth." 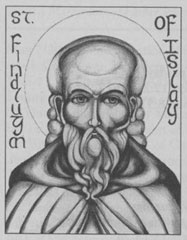 Eventually, he went to Iona in Scotland, where he saved the life of the great missionary, St. Columba.  While living here, St. Columba had resolved to confront particular oppressors of the monks.  Among these, Johan, the son of Conall, was especiallynotorious. Instigated by the devil, he rushed on the saint with a spear intending to kill Columba. To prevent this attack, Finlog, put on the saint's cloak and stood between him and the assassin, being ready to die for the sake of the holy man. But St. Columba's garment served as a reliable and impenetrable shield, which could not be pierced by the very sharp spear.

Finlog remained safe and uninjured under divine protection.  St. Columba then founded a monastery near Lough Foyle, in the territory of Derry in Ireland. The townland is called Tamlacht. Over this house, the great father of Irish monasticism placed his disciple, Finlog, as the first abbot. Hence the place derived its name of Tamlacht-fin log- an. It is now a parish in the diocese of Derry.  A much-frequented cemetery marks the old monastic ruins.  Within the monastic enclosure are the ruins of an early church.

St. Finlog is also venerated on the island Islay [pronounced Ila] where a chapel bears his name.  Nearby is another chapel dedicated to St. Columba.  Part of St. Columba's missionary effort embraced Islay, and St. Finlog founded the Church at Loch Finlagan, and lived and died there, fulfilling the earlier prophecy about his life.

The Christian courage and charity of this St. Finlog are commendablebecause he desired to sacrifice his own life to preserve that of his great spiritual father. Greater love than this no man possesses when he is ready to give up his own life for the safety of his friend.  St. Finlog proved to be utterly unselfish and nobly generous of spirit. His humility and obedience were equally apparent.  He was always ready to accept anycommand which might best promote the glory of God. In Scotia his religious acts were prominent, and the people of Ireland and Scotland have just reason to celebrate his virtues.

As a glorified Saint, his virtuous life has enriched the entire Church.  The Orthodox Church honours St. Finlog and his brother on 3 January with this hymn.

Troparion of the Sts Fintan and Finlog
Tone 1
“Being brothers both in the flesh and in the Faith
O honoured Fintan and Finlog,
you served our Savior in your native lands
winning souls for Him by feats of ascetic piety.
Cease not your love for us,
praying that our souls may also be saved.”