St. Drostan lived in the late sixth to early seventh centuries. Among the sources which mention him are the tenth-century Book of Deer and the fifteenth century Aberdeen Breviary.  St. Drostan was born Drostán mac Coscreig in Ulster, the north of Ireland. He was the son of Cosgreig a local tribal leader.  Drostan was a student and disciple of St. Columba of Iona, the Enlightener of Scotland, who was from Derry, Ulster. One source claims that St. Drostan was St. Columba’s nephew.  St. Drostan often accompanied St. Columba on his missionary journeys to Scotland. 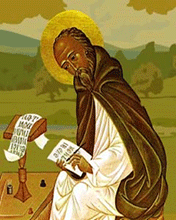 Together with three Companions; St. Colman, St. Medan and St. Fergus, St. Drostan became one of the founders and first abbot of the great monastery of Deer in Aberdeenshire on Scotland’s’northeast coast. With time Deer Abbey grew into a significant monastic and missionary center, gaining support from the local Celtic kings and converting the local tribes to the Faith.

At the Monastery of St. Drostan in Deer, the unique Gospel called “The Book of Deer” was created in Latin with some Old Irish and Scottish Gaelic additions. This rare and precious treasure survives to this day. The Book of Deer contains the earliest surviving Gaelic text in Scotland. The manuscript is illuminated, it was written on vellum probably by the same scribe. 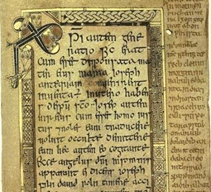 It contains the whole text of the Gospel of John, fragments of the other three Gospels, the Creed of the Apostles and fragments of the Old Irish Liturgy. Since 1715, the Book of Deer has been in the possession of the University of Cambridge Library.

Thanks to the influence of St. Drostan a large number of churches were established in northeastern Scotland.  Years later the faithful persuaded St. Drostan to become abbot of the Holy Wood Monastery but soon afterwards, feeling a call to lead the solitary life of a recluse, he left there and retired far to the north. A seventh century church at Tarfside, Glen Esk is dedicated to St. Drostan and serves the faithful to this day.

Soon the poor, the sick and the needy of the region began to flock to the holy hermit on whom God bestowed the gift of performing miracles. There is, for instance, the account of St. Drostan restoring the eyesight of a priest called Simon. 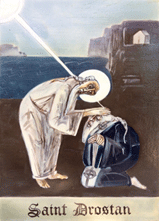 This Icon of this healing of Simon the priest is from the Orthodox Monastery of Mull in Scotland.  The Abbot and Icon painter, Fr. Seraphim offers the following description; “His [St. Drostan] expression is loving, but focused and deep in prayer. He does not look at the kneeling priest, but at the Light pouring through his hands over Symeon’s hands, completely aware that this Light (not himself) is the source of all healing and salvation. Like all confessions, this icon depicts the meeting of three Persons, not two: the spiritual father, the son and God Himself. Symeon’s humility (he is kneeling before the saint) comes from his need and despair, but St. Drostan’s humility (note his posture) comes from his awareness that he is doing God’s work, in His Maker’s presence (which is why he is slightly bowing, as if standing before Christ). I purposely chose not to depict St. Drostan as a priest (although he was ordained), because I wanted to signify that spiritual fatherhood is not an exclusive charisma of the ordained clergy – the Tradition of the Church has kept the memory of simple monks (and, indeed, nuns) whom Christ had blessed for this particular work.”

St. Drostan reposed in the Lord in about 610.  Many referred to him as one of the apostles of Scotland. His holy relics rested in a stone coffin at the Aberdour church and many miracles occurred there.  Today this is the village of New Aberdour, where the church was always considered to be one of the earliest in Scotland, originally built by Sts. Columba and Drostan.  The ruins of the church that once held the relics of St. Drostan still survives.  A holy well where St. Drostan baptized the local tribes still exists nearby and pilgrims continue to visit and pray at this holy place.

Abbot od Deer and disciple of Saint Colum Cille
Who did kindle Christ’s fire in the hearts of monks
Pray for us, O Drostan, to Christ our God
That our souls may be saved.