Cuthbert was born in 634 into a noble Scottish family. His birthplace is not known, though some researchers suggest Dunbar beyond the Scottish border. From the age of eight, Cuthbert was raised by a poor widow called Kenswith in the Scottish Lowlands. She loved him dearly and taught him how to pray. Later Kenswith became a nun of holy life. 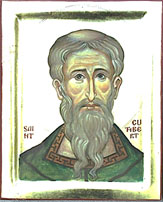 He became a monk in his youth at the monastery of Melrose by the River Tweed. After many years of struggle as a true priest of Christ, in the service both of his own brethren and of the neglected Christians of isolated country villages, he became a hermit on Farne Island in 676. After eight years as a hermit, he was constrained to leave his quiet to become Bishop of Lindisfarne.

Cuthbert possessed a rare spirit of endless love of God, people and every single creation of God, and had kindness, great compassion and zeal in preaching the Gospel; for his humility and loving heart the Lord bestowed on Cuthbert the gifts of prayer, miracles, prophecy, and clairvoyance. His loving and amicable nature attracted the hearts of his contemporaries to him; he was a friend of many other saints of that age, but also of common folk and members of the royal family. For 53 years of his life he was a simple monk, an abbot of monasteries, a teacher, a missionary, for many years—a recluse, and for a short time—even a bishop. His personality combined prayerfulness, love for the solitary life and at the same time he had enormous energy and zeal in spreading the Gospel and helping ordinary people.

Wild animals loved and served the saint during his life. Thus, on the way to his first monastery, Cuthbert spent the night in an old hut, being very hungry. That night his faithful friend—a horse—found hot bread among hay. Cuthbert praised the Creator, ate his half and gave the other half to the horse.

Cuthbert prayed for all and had the gift of tears; he saw the sufferings and sins of people and shed tears because of this, himself doing penance for their sins. He exhorted people, persuading them to love God and their neighbor; otherwise our soul is an easy target for the devil. He served the Divine Liturgy with tears and the people felt the presence of God each time he served; his face was often transformed and became filled with light as he prayed. Cuthbert healed sick people even at distances: thus, once he expelled a demon from the wife of a judge with whom he was talking, even though the judge did not mention his wife’s illness and the latter was many miles away.

“Because of the miracles he wrought both during his life and at his tomb after death, he is called the "Wonderworker of Britain." The whole English people honoured him, and kings were both benefactors to his shrine and suppliants of his prayers. Eleven years after his death, his holy relics were revealed to be incorrupt; when his body was translated from Lindisfarne to Durham Cathedral in August of 1104, his body was still found to be untouched by decay, giving off "an aroma of the sweetest fragrancy," and "from the flexibility of its joints representing a person asleep rather than dead."

Finally, when the most impious Henry VIII desecrated his shrine, opening it to despoil it of its valuables, his body was again found incorrupt, and was buried in 1542. It is believed that after this the holy relics of Saint Cuthbert were hidden to preserve them from further desecration. (Great Horologion)