Born in Beijing on 10 December 1855, Tsi Chung was the son of Orthodox Christian parents whose ancestors had been Christian for several generations.  Orthodox Christianity had been in China since at least the seventh century.  Tsi Chung lost his father when he was young and he was raised by his mother, Marina and his grandmother, Ekaterina.  He was educated at the Russian Ecclesiastical Mission in Beijing where he was urged to study for the priesthood.  At school he assumed his baptismal name Mitrophan.  Described as ‘shy and unassuming’ he also trained as a printer and linguist proficient in translating Russian texts to Chinese.  He resisted becoming a priest insisting that he was, ‘a man of poor talent and little virtue’.  His instructors convinced him to be ordained when he finished his theological education.  He married a young woman named Li known as Tatiana and their son, Isaiah was born in 1877. 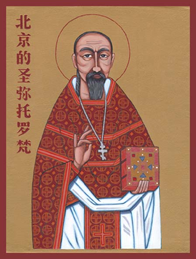 In 1880 Mitrophan was ordained a priest by St. Nicholas the Bishop of Japan.  As a priest of the Russian Mission he continued his work as a printer translating, proofreading and printing Orthodox Liturgical and theological books from Russian into Chinese.  He set up his own printing shop and established a chapel where his mission grew to several hundred parishioners.  A second son, Sergei was born at that time and another son, John was born to Fr. Mitrophan and Tatiana in 1892.

In 1899 an officially supported peasant uprising began that attempted to drive all foreigners and foreign influences from China.  Foreigners referred to the movement as the “Boxer Rebellion” after the secret society that started the uprising.  The group practiced certain boxing and calisthenic rituals in the belief that this made them invulnerable.  The uprising soon targeted Christians as members of a ‘foreign influenced religion’.

In June 1900, the “Boxers” targeted Fr. Mitrophan’s printing shop and mission.  His shop and press were completely destroyed.  Fr. Mitrophan sheltered and encouraged his parishioners during these trying times.  On the night of June 10, rebels surrounded his house and killed Fr. Mitrophan along with many of the 70 people inside. St. Mitrophan was stabbed to death under a date tree in his yard.

His son Isaiah, who served in the Chinese Army was beheaded on June 7 by rebels who knew he was a Christian.  Fr. Mitrophans' wife, Tatiana, escaped the house with Isaiah's fiancée, Maria, but Tatiana was beheaded June 12 along with other Christians.  Maria had come to the house two days before the attack, determined to stay with her dead fiancé’s family despite the danger. She had been urged three times by Fr. Mitrophans' son Sergei to run away and hide, but refused to leave. She helped many others escape, but she chose to remain with Isaiah's family, where she was also eventually murdered by the Boxers. Eight-year-old John was attacked and beaten on June 10, 1900 by the Boxers and Maria hid the little boy where he survived the attack.

The next day, according to the reports of followers, he was seen sitting naked on the steps outside the house, begging for water, which his neighbors refused him. Their children mocked him and called him a follower of devils. John reportedly replied, "I am a believer in God, and not a follower of devils."  Others asked him if his wounds hurt and the child reportedly replied, "It does not hurt to suffer for Christ." He was later taken away again by a crowd of Boxers to be murdered, but seemed to show no fear.

St. Mitrophan is the best known of the 222 Holy Chinese Martyrs canonized by the Orthodox Church on the hundredth anniversary of their martyrdom in 2000.  The ‘Great Horologion’ [book of saints] of the Orthodox Church states that, "The Holy Martyrs of China were native Chinese Orthodox Christians brought up in piety at the Russian Orthodox Mission in Peking, which had been founded in 1685. During the Boxer Rebellion of 1900 against the foreign powers occupying China, native Chinese Christians were commanded by the Boxers to renounce Christianity or be tortured to death. Two hundred and twenty-two members of the Peking Mission, led by their priest Metrophanes Tsi-Chung and his family, refused to deny Christ, and were deemed worthy of a martyric death." 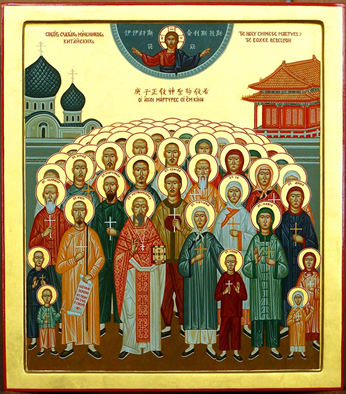