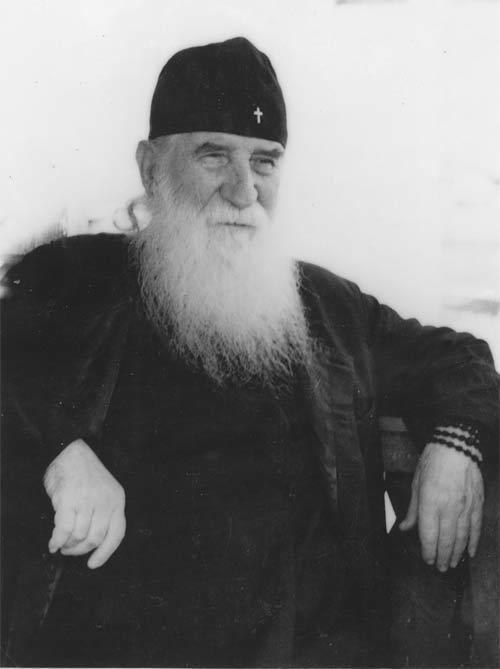 Justin Popovich[meaning=son of a priest] was born on the Feast of the Annunciation 1894, in Serbia, to a family of priests.  He was the seventh generation of priests on his father’s side. He began reading the scriptures at a young age, and as an adult carried a New Testament with him, reading three chapters every day. He studied at the Seminary of St. Sava in Belgrade. In 1914, he completed the nine-year seminary program. He desired to become a monk, but postponed entry into the monastic ranks due to the outbreak of the First World War and the poor health of his parents. He spent the war years caring for his parents and serving as a nurse.

In 1915 he was tonsured a monk under the name Justin, after St. Justin the Philosopher. Shortly thereafter he traveled to Petrograd, Russia to study at the seminary; there he acquired a deep, first-hand knowledge of the Russian ascetical tradition and a lifelong love of Russian spirituality, especially that of the common people. Justin then attended Oxford University from 1916 to 1919, writing a doctoral dissertation.

After a brief return to Belgrade, he entered the Greek Orthodox School of Theology in Athens. As in Russia, he used his time there not merely to study but to drink in the Orthodox spirituality of the Greek people. He was ordained to the diaconate while in Greece, then to the priesthood after returning to Belgrade in 1922.

Father Justin's preaching, writing and spiritual counsel became known throughout his country. In 1931 he was sent to Czechoslovakia to help in reorganizing the Church there.  Realizing the people's crying need a clear exposition of the Faith in their own language, he began in 1932 his three-volume Dogmas of the Orthodox Church. The first volume was so well-received that Fr. Justin was made Professor of Dogmatics at the Seminary of St. Sava, where he remained, completing the Dogmas and several other books, until the end of World War II. The new atheistic Communist regime then banned him from the university system, and Fr. Justin lived from that time on in various Serbian monasteries.

In 1948 he entered Chelije Monastery, where he remained until his repose in 1979. He became Archimandrite and spiritual head of the Monastery. It was during this period that he emerged as a great light of Orthodoxy: pious believers from all parts of Yugoslavia, from Greece, and from all over the world traveled to Chelije to hear the holy Justin's preaching and seek his counsel.

Saint Justin reposed in peace in 1979 at the age of 85, on the Feast of the Annunciation — the date of his birth. Since his repose, many miracles have been witnessed at his grave: healings, flashes of unearthly light from his tomb, and conversions of unbelievers by his prayers. His many writings are increasingly recognized as a fount of pure Orthodox teaching in the midst of our dark time.