Sylvester, was born at Rome to devout Christian parents named Rufinus and Justa.  He received an excellent education and was ordained a priest at Rome at the turn of the fourth century.  He was regarded as a renowned scholar of the Sacred Scriptures and teacher. He fulfilled the Lord’s command to love one’s neighbor by receiving strangers and travelers into his own home and serving them as a servant. 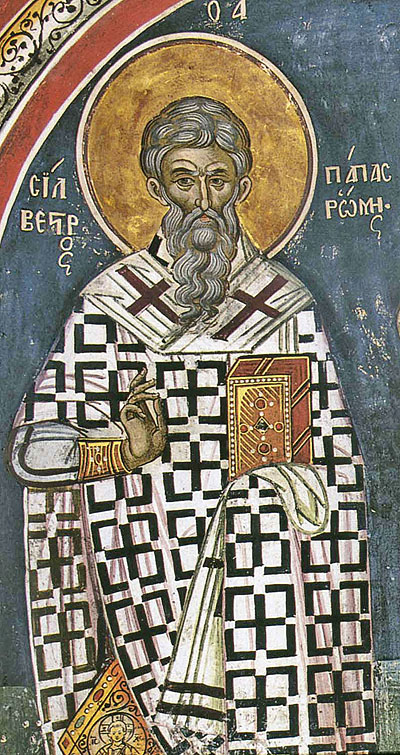 During the last persecution of Christian’s, Sylvester sheltered the saintly holy martyr Bishop Timothy of Antioch, who dwelt with him for more than one year while preaching and converting many to Christ.

Sylvester was elected Bishop of Rome in 314, the first bishop elected freely after the Edict of Milan [313] granted freedom of worship throughout the Roman Empire.   During Sylvester’s reign, Rome began its transition into a Christian city.  The Emperor Constantine ordered the construction of several great basilicas, including the Basilica of St. Peter on the Vatican Hill.  This church was erected above a former pagan temple, to mark the burial place of St. Peter, the chief of the apostles and the first Bishop of Rome.  St. Sylvester and the Emperor Constantine also collaborated on the Lateran Basilica and Baptistery, which were built adjacent to the former imperial palace where the Pope now lived.   He also commissioned the Basilica of St. Paul outside the walls of the city.  Sylvester’s memory, however, is most closely tied to the church of St. Martin and Sylvester which still stands in Rome’s Monti neighborhood.

Pope Sylvester played a role in negotiations regarding the heresy of Arianism debated at the first Ecumenical Council of Nicea in 325.   Although he himself did not attend the Council, he sent his representatives to defend the orthodox teaching.  His deep faith so moved his contemporaries, that they publicly honored him as “Confessor”, i.e., one who, though not suffering martyrdom, lived a life completely given over to Christ.  His name is associated with the creation of the ancient Roman school of sacred music and he contributed to the development of the divine liturgy.   During his reign the first official list of Martyrs and their stories was composed which became the basis for the ‘calendar of saints’.

St. Sylvester guided the Church at Rome for more than twenty years, earning the esteem of his flock.  He died peacefully in old age in the year 335.