May 16th
St Brendan the Navigator 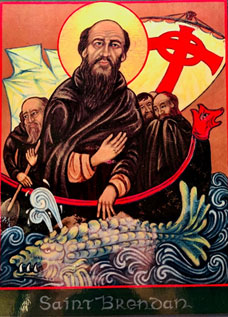 St. Brendan, regarded as one of the Twelve Apostles of Ireland, was born into the Altraige clan around 484 at Tralee in the district of Kerry, on the west coast of Ireland. His parents were Finnlug and Cara of a seafaring family who lived on the Bay of Tralee. Brendan was baptized by the Irish Saint Eric the Bishop of Slane with the name ‘Broenfinn’ meaning ‘fair-drop’. He was educated by two other Irish Saints, St. Brigid of Munster and St. Finnian of Clonard. He was ordained a priest at age twenty-six by St. Eric of Slane and entered the monastic life, first as a hermit and later as spiritual father to a community of fellow monks who gathered around him.

Together they took to sea and founded a monastery on the rugged Aran Islands. From their home monastery St. Brendan and his sailor monks founded monastic settlements on Argyll island off the coast of Scotland, along the coast of Wales and in Brittany on the coast of France. After years as missionaries, Brendan and his monks returned to the Bay of Tralee and established their monastic cells on the highest mountain of the region, now known as Mount Brendan. From here he undertook a seven-year voyage of exploration in the northern Atlantic Ocean which began in AD 530. In the ninth century the adventures of St. Brendan and his fellow voyager monks were recorded in the famous Latin text the “Navigatio Sancti Brendani Abbatis” [The Voyage of St. Brendan the Abbot]. The saga relates how the monks made a boat of oak timber and covered it in leather hide, put up a mast in the form of a cross and decorated a broad sail. St. Brendan and his band of monks then prayed and fasted for forty days before dedicating themselves to the protection of the Holy Trinity and setting sail in search of the Earthly Paradise.
The narrative describes for the first time such natural wonders as a volcanic island – associated with Iceland where “lumps of fiery slag fell into rivers of gold fire” and “giant crystal pillars floated on the waters” – a reference to icebergs. The saga also describes the northern lights, giant wales, migratory birds, an island of wild sheep and vineyards of wild grapes. Based on the description of geography, sea life, plants and animals, some have suggested that the account describes the first voyages to Iceland, Greenland and Labrador. The entire saga is also described as a diary of “salvation, obedience and faith needed to undertake the pilgrimage of Christian life”.

On his return to Ireland, St. Brendan retired to the region of Galway on the rugged west coast and founded a monastery at nearby Clonfert. He also assisted his sister St. Briga to establish a convent. He reposed in peace in 577 and was buried at the monastery in Clonfert. Following his death pilgrims flocked to visit his burial site
and eventually a church was built over St. Brendan’s grave. His intercession and protection was sought by early seafaring explorers including Magellan and Christopher Columbus. He is the patron saint of the U.S. Naval Academy at Annapolis and a stained-glass window of the saint adorns the chapel there. He is also the patron of deep-sea fishermen, boats men and scuba divers. His life and adventures are illustrated in literature, music, art, theater and film.